I am delighted to be able to share with you today the brand spanking new cover for An Unfamiliar Murder. 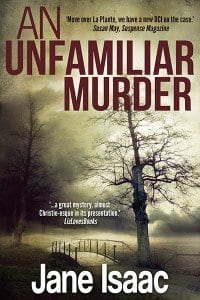 The cover was designed by Debbie at TheCoverCollection. I hope you like it. I’m really thrilled!

This was my first book, originally published by US based Rainstorm Press in February 2012. Since the rights reverted back to me last summer, I have been tidying up the script ready to re-release in March 2016. I can’t wait to share it again. In the meantime, here’s the blurb:

I’d like to extend my sincere gratitude to all the lovely book bloggers, readers and writers who have supported me in this new venture. It’s my first attempt at self-publishing and I really appreciate your support.