I’m very excited to share the new cover and blurb for the second in the DC Beth Chamberlain series (formerly Presumed Guilty and now retitled For Better, For Worse) with you today! I hope you love it as much as I do. 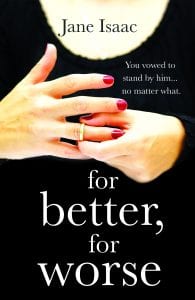 This book amassed almost 50 wonderful Amazon reviews with a 4.8/5 star rating in its first edition, as Presumed Guilty. If you haven’t read it already, do peruse the blurb and see if it catches your eye.

Stuart Ingram was once a respected local councillor…

The first time the police knocked on Gina’s door, they arrested her husband.
The second time, they accused him of child abuse.

But he died a guilty man.

This time, the police are here for Gina – to tell her that her husband is dead. Murdered, just two weeks before his trial.
Gina always stood by her husband. Even when everyone else walked away. She believed the trial would clear his name. But now Stuart is dead.

And his wife is the suspect.

It’s a race against time for DC Beth Chamberlain to uncover the truth – especially when a second man turns up dead.

For Better, For Worse will be released by Aria Fiction on 19th March is available to pre-order here. The books are written as standalone stories, but if you wish to start the series from the beginning you can order The Other Woman here.

I realise some of you have been patiently waiting for news of DC Beth Chamberlain book 3 and I’m pleased to announce that Aria Fiction have scheduled to publish this title in paperback and e-Book in August 2020! I’m so excited to share this new story with you, not least because Beth faces her most challenging case to date in an investigation that brings the threat of murder to her own door.

I look forward to sharing the cover and more details on book 3 with you over the forthcoming months.

Thanks again for all your support & happy reading!