Hello! I’ve been absent from the blog awhile, finishing up my last few weeks at the day job and squeezing in some local events whilst gearing up for the upcoming release of The Lies Within. A huge amount has gone on however, behind the scenes, and I thought I’d share a snapshot of that with you today.

I’m a guest speaker on the Women’s Institute list for Northamptonshire this year and have already visited almost half a dozen groups in the first few months of 2017 to talk to them about writing novels. It has been a pleasure to travel around the county giving talks to such warm and receptive audiences, and I look forward to continuing this over the forthcoming months. My aim is to learn the words of Jerusalem by the end of my twelve months. We’ll see!

I’ve also visited some other groups, such as Wellingborough Rotarians, who were all lovely, and last week I received a rather unexpected invitation onto the Helen Blaby show on local radio. I keep joking with my husband that as soon as April lands, and I finish the day job to focus on my writing career, things will go quiet. Still, at least it will allow a breather for some new words! I haven’t done much work on my new project at all this year, but have been rolling ideas around my head and reading some very interesting books for research. More on that soon. 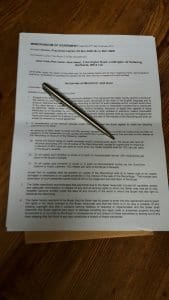 I’m delighted to share with you that, five years after its first publication, and a year after the rights reverted to me and I re-released it, my debut novel will be published in audio by Oakhill. I’m very excited about this deal, not least because it will be read by the wonderful Cathy Sabberton who did a fabulous job of The Truth Will Out, but also because I plucked up the courage to negotiate the contract myself. All former rights deals have been handled by my publishers, but this is now a self-published title and therefore I needed to approach Oakhill direct. And I’m so glad I did! As soon as I have a release date for An Unfamiliar Murder in audio, I will share it with you. 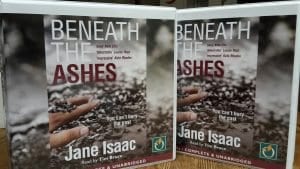 Following Before It’s Too Late last year, Beneath the Ashes was released in audio in February, with The Lies Within following shortly, so if you are a fan of audio books, the entire DI Will Jackman series to date should be available in this format by the end of year. Also, if you are US based, Beneath the Ashes will be released in paperback in America on the 1st of May. 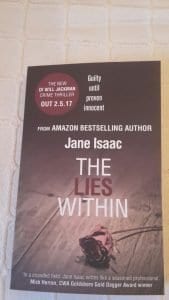 Paperback proof copies of The Lies Within have gone out to early reviewers and fellow authors, ahead of its release in the UK on the 2nd of May, and I’m pleased, and relieved, to say that initial feedback is looking good. Here’s a few of the endorsements that have already landed:

‘Jane Isaac’s new DCI Jackman novel, The Lies Within, is a well-crafted mystery which carefully reveals the story of why a woman is on trial for murder by leading us through the investigations into who attacked two women and murdered a third before events take a dramatic turn. Isaac creates some well-drawn three dimensional characters and at each sitting I was left reading more than I intended to. Crime writing at its best.’ David Evans, author of The Wakefield crime fiction series, shortlisted for the CWA Debut Dagger, 2013.

‘Gripped from the very first page.  A highly satisfying, but deeply unsettling tale of a family torn apart.  Expertly told from both sides of the investigation … and just when you think it’s over, it’s really only the beginning.  Mesmerising and disturbing, this is crime-writing at its very best.’ June Taylor, author of Losing Juliet.

‘Blink and you’ll miss a clue. Isaac enthrals us again; with another superb instalment of DI Will Jackman.’ Ian Patrick, author of Rubicon.

I’ll be launching The Lies Within at the wonderful Oundle Festival of Literature on the evening of the 5th of May. Do join me there if you can. I’m also delighted to be appearing at the Felixstowe Book Festival alongside Michael J Malone and Ruth Dugdall on the 2nd of July on the ‘Panel of Lies’, and will be participating in a ‘read dating’ event at Deeping Literary Festival on the 29th of April – should be interesting! I’d love to see some of you there if you can make it.

For online friends, there will be a Facebook launch of The Lies Within arranged by my publisher, Legend Press, which I understand will run over several days of the first week of May and will include competitions and giveaways. I’ll share more details here as soon as I have them.

I couldn’t pursue my publishing career without the constant help and assistance of readers, reviewers and bloggers who help to spread the word, and I’d like to extend my heartfelt thanks to you all. Your support means the world to me and I’ll always be grateful.

Thanks for reading my update. Next week, I’ll be sharing a taster of The Lies Within with you.

2 thoughts on “A Little Update”