I’m delighted to welcome, Julie-Ann (J A Corrigan) to the blog on the publication day of her debut novel, Falling Suns. Julie-Ann and I first met online when we both submitted short stories for the crime anthology, Crime After Crime back in 2012 and I’m thrilled to host an interview with her today. I can’t wait to read this one! 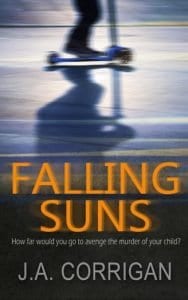 An uncomfortable and disturbing tale that charts a mother’s grief-stricken journey as she pursues revenge for the brutal murder of her son.

My favourite character is Michael Hemmings who is the anti-hero of the novel. However, as with all good villains in literature and film, and although he is misguided in his motivation, there is a reason he is the way he is, and does what he does. That reason is the premise to the story.
Although Michael is a totally made-up, fictional character I did a lot research around my villain and his personality disorder. Writing Michael Hemmings was extremely challenging, but also very rewarding, because although constructing his scenes was emotionally difficult – ultimately – they were some of the most satisfying to write.

I am very calm and ordered when actually writing, but there is much confusion when I’m trying to outline a story, and get it working inside my head. I am like a duck: vigorous paddling going on underneath that calm exterior.
I’m a morning person, and always much, much calmer during the first part of the day. I tend to spiral into chaos at around 3pm. And that’s when I should stop writing.

I think it has to be coffee and tea. And sometimes, when the going is tough, doritos, then finally, wine.

A psychological thriller for fans of Belinda Bauer, Mark Edwards, Clare Mackintosh – a dark and brooding tale about the horrors that can lurk within a family.

Ex-DI Rachel Dune’s small son is missing. Then his body is discovered. Her cousin Michael is found guilty of his murder and incarcerated in a secure psychiatric unit.

Four years later, now divorced and back in the police force, Rachel discovers that Michael is being released to a less secure step-down unit, with his freedom a likely eventuality. Unable to cope with this, she decides upon revenge, assuming a new identity to hunt him down and kill him. However, as she closes in on her target, her friend Jonathan, a journalist, uncovers some unnerving information about her mother and others in her family and begins to suspect that Rachel’s perception of the truth might not be as accurate as she thinks – that she might be about to murder the wrong man…

Thanks, Julie-Ann! You can purchase Falling Suns here. 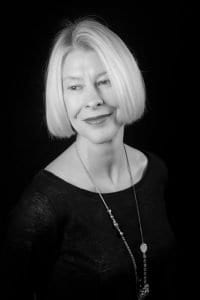 At eighteen, keen to leave her hometown and head for the dazzling lights of London, and following her love of words and history she signed up for a BA (Hons) Humanities degree, majoring in English Literature and History.

Never really knowing what she wanted to do with her new degree, she worked as a waitress in Baker Street, which was possibly one of the most fun and lucrative jobs she has yet to have. She went on to teach English in Greece as well as working on a boat, managing a local Greek restaurant and coordinating airport transfers for the tourists!

She loitered around in Spain for a while too.

Eventually, guided by an interest in medicine, ­she decided to go back to university, completing a BSc (Hons) in Physiotherapy.

But the burning desire to write became stronger and she knew that if she didn’t have a go at writing soon, she never would.

Starting off writing short stories and magazine articles, she was lucky and early on saw her work published.

In 2013, she decided to write a novel in a genre of which she was reading more and more: psychological thrillers.

JA Corrigan lives in Berkshire with her husband and daughter, and a very cute dog called Harley.

She is currently working on her third novel – another dark tale.