I’m so excited to welcome my dear friend Ian Patrick to the blog today, as he publishes his debut novel, Rubicon! I was lucky to get an early read of this book and it’s fast paced and all absorbing. In essence, fabulous! I can’t wait to read the follow up (and I’m not just saying that because I know Ian, it really is a page turning read). Here’s Ian to tell us a bit more about it.

Rubicon is a tense, dark thriller that is definitely not for the faint hearted. (That’s as sensual as it gets!)

I found Batford an intriguing lead. How did you build his character?

His character was a tough one to develop. In short I took an image of a subject and developed him with the opposite motivations and belief systems I would agree with. This in itself presented a challenge writing him up as there were moments it felt like I was shouting, you can’t do that! This made the book special, as I had to dig deep into a darker side I don’t possess. Watching him unfold on the page was fascinating. Do I like him? Absolutely!

Will we be seeing more of Batford in the future?

I’m a prolific reader across genres. I try and read as many authors as I can to keep challenging myself as a writer. My main likes are: Cormac McCarthy, Ed McBain, Chuck Palahniuk, Philip K Dick and, of course, you Jane..

I don’t feel qualified to answer that question yet, but for Rubicon it was all written using Scrivener. I knew the start and the end but had no idea of the in-between and just let the story evolve, which I’m glad to say it did! I treated the process like an investigation. Whatever the protagonist threw into the mix I reacted to with the investigative team. This wasn’t easy. I’ve tried to weave a story that will let the reader see both sides of an investigative process when one of the team is corrupt. I do believe in having faith in yourself and let the process that suits you evolve. As a detective you had to have that open mind when you worked.

Time. Time is my guilty pleasure. If I’m writing it means I’m alone and I have to be alone to enter Batford’s world.

I’m conscious of being away from family. When you have a career in the police you miss many hours of family life that you can’t claim back.

Two cops, both on different sides of the law – both with the same gangland boss in their sights.

Sam Batford is a corrupt undercover officer with the Metropolitan Police who will stop at nothing to get his hands on fearsome crime-lord Vincenzo Guardino’s drug supply.

DCI Klara Winter runs a team on the National Crime Agency, she’s also chasing down Guardino, but unlike Sam Batford she’s determined to bring the gangster to justice and get his drugs off the streets.

Set in a time of austerity and police cuts where opportunities for corruption are rife, Rubicon is a tense, dark thriller that is definitely not for the faint hearted.

Jane – Thanks for inviting me here, it’s a great privilege and much appreciated. My pleasure! It’s been wonderful to follow your journey to publication. 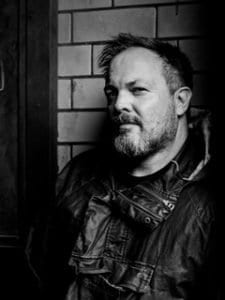 Educated in Nottingham, Ian left school at sixteen. After a short spell in the Civil Service he moved to London, aged nineteen, for a career in the Metropolitan Police. He spent twenty-seven years as a police officer, the majority as a detective within the Specialist Operations Command. A career in policing is a career in writing. Ian has been used to carrying a book and pen and making notes. Now retired, the need to write didn’t leave and evolved into fiction.

Rubicon is his debut novel. He now lives in rural Scotland where he divides his time between family, writing, reading and photography.