I’m delighted to let you know that After He’s Gone, the first in my DC Beth Chamberlain (Family Liaison Officer) series, is now available in audio version. Here’s a goofy pic of me receiving my author copies! 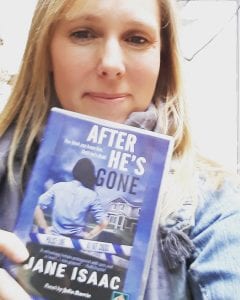 After He’s Gone was recorded by the award-winning actress Julia Barrie, and released by the lovely team at Oakhill Publishing. I was lucky enough to go along to the studios in Oxford to watch some of the recording take place, a first for me and a fascinating experience.

The CD versions are on Amazon now, but the Audible download (at a much more reasonable price) will be available from the beginning of June.

Here’s a reminder of the blurb:

You think you know him. Until he’s dead.

When Cameron Swift is gunned down outside his family home, DC Beth Chamberlain is appointed Family Liaison Officer: a dual role that requires her to support the family, and also investigate them.

As the case unfolds and the body count climbs, Beth discovers that nothing is quite as it appears and everyone, it seems, has secrets.

‘A refreshing female protagonist with guts and a heart…I was gripped.’- Ruth Dugdall