I’m thrilled to welcome Neil Lancaster to the blog today to share an interview with us about his upcoming debut, Going Dark. All novels are special but, as I’ve said before, there is something extra special about a debut and this one will be super interesting with Neil’s background in policing (see bio below for more details)! Going Dark is released on 17th April and available to pre-order here. 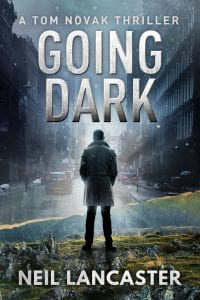 Sensual???? Have you seen the blurb, Tom’s a steely eyed, ruthless killer!! Ok, then, if you insist, I’ll have a go…. “Going Dark is a sumptuous romp of an adventure thriller that takes DS Tom Novak on a journey from Bosnia, to London and Scotland where he must fight for his very survival against impossible odds,” That’s as close as I can get to sensual. I tried to write a sex scene once but it made me want to crawl into a dustbin in horror!

It would be too easy to just say Tom. I absolutely love Stan. Stan is an old Sergeant Major from the Royal Marines who is the clerk in Tom’s CID office. He is a real character who knows everything and everyone and wields power that his low grade role does not necessarily merit. He is heavily influenced by the clerk in the first CID office I ever worked in. A real character called Jim that I didn’t even have to invent I even included his big, bushy beard. I do wonder if he is still with us, he was one of a kind.

Not an obvious choice for a crime author. Gerald Durrell is where it all started when my Mum made me read “My Family and Other Animals” years ago. It made me realise how much could be transmitted with just ink on a page. Durrell transported a 10 year old me straight to Corfu, such was the strength of his writing.

Being a bit more genre specific, I have utterly loved the “Orphan X” series by Gregg Hurwitz. They are compellingly brilliant. I always listen to them on audio and my dog gets no rest until I’m finished and then I am devastated that they are over. My early adventure thrillers were old school Jack Higgins, Clive Cussler, Alistair Maclean and Desmond Bagley. They blew me away when I first read them when I realised that a book could be more exciting than a film or TV show.

I am a complete “pantser.” I have no idea how to plot a novel, I wouldn’t even know where to start, which is a bit of a worry. My ideas come on my long dog walks or in the middle of the night. Unfortunately I forget many of them as I am so rubbish at writing anything down. I have tried to write spider graphs, plot summaries and the like but once I’ve done them I never look at them again. All I need is a laptop, Google and a window to stare out of. I have a basic idea and I just start writing and the ideas take me to places that I don’t think I would have arrived at had I planned. I wish I could plot, It must make it less stressful.

Strong, black coffee in the morning (just like Jack Reacher, ahem.), then Roibos tea in the afternoon . I avoid biscuits and chocolate as I’m one of the unfortunates that one biccie will always lead to twenty. I break for lunch and half an hour of the news and then it’s back to work, if staring out of the window or getting annoyed about twitter is work. If I cracked a beer or poured a glass of wine whilst writing then I wouldn’t last long and would probably be found asleep with my head on my laptop dribbling with my 8 year old son waiting on his own at the bus stop.

Tom Novak is a troubled soul with a dark and bloody past.
A former refugee, Royal Marine, and member of the elite Special Reconnaissance Regiment, he now finds himself struggling with the deadening routine of day-to-day policing.
When he is deployed undercover to infiltrate a gang of people-traffickers, things go badly wrong. Faced with an impossible choice, his cover is blown and he finds himself on the run from the Serbian mafia and even his fellow police colleagues.
With no-one to trust, and his enemies using all the resources of the state against him, Tom has only one option: to Go Dark.
Who are the police traitors feeding the Serbian mafia his every move? Is there anyone he can trust? Can Tom prove his innocence before it’s too late?

Going Dark is the debut crime thriller from former covert specialist Detective Sergeant Neil Lancaster, and the first in the Tom Novak series. If you enjoy gritty suspense, thrilling action and flawed heroes battling against the odds, then you’ll love Going Dark.

Thanks Neil, this sounds fabulous! I do love that cover art. I’m off to pre-order my copy now. 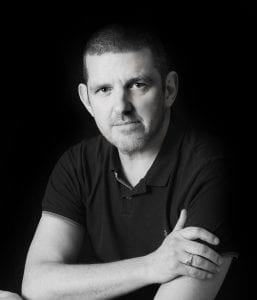 Neil Lancaster was born in Liverpool in the 1960s. He left the Metropolitan Police in 2015 where he served for over twenty-five years, predominantly as a detective, leading and conducting investigations into some of the most serious criminals across the UK and beyond.

Neil acted as a surveillance and covert policing specialist, using all types of techniques to arrest and prosecute drug dealers, human traffickers, fraudsters, and murderers. During his career, he successfully prosecuted several wealthy and corrupt members of the legal profession who were involved in organised immigration crime. These prosecutions led to jail sentences, multi-million pound asset confiscations and disbarments.

Since retiring from the Metropolitan Police, Neil has relocated to the Scottish Highlands with his wife and son, where he mixes freelance investigations with writing.