Today I’m welcoming Dave Sivers to the blog. Dave’s new book In Ink is scheduled for release on 15th May and available for pre-order now. Don’t you just love that cover! Here’s a cheeky little taster to tickle your taste buds. 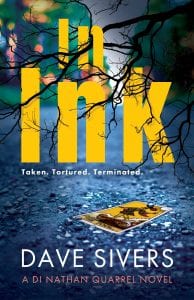 The rhythmic beat of the music helps you concentrate your mind on the task in hand. It is the perfect accompaniment to the buzz of the machine as you guide it in its delicate work.
Rap, specifically grime: it hasn’t always been a sound you appreciated but, when you were doing your apprenticeship… well, that was when you really started to get it. The stories the artists told, the rawness and darkness to be found in some of the lyrics. And those rapid, syncopated breakbeats. It’s ideal for this work.
Today it’s Stormzy. Okay, not exactly obscure, but you like it.
The machine itself sounds a little like an angry wasp as it glides over the surface, puncturing the skin between 50 and 3,000 times per minute as it penetrates the dermis by about a millimetre and deposits a drop of insoluble black ink into the skin with each puncture. And, with each puncture, your painstaking work of art has been emerging, literally drop by drop.
Those numbers are important, the precision of it all as beautiful as the image you’re creating.
You’ve been at this for the best part of five hours now, and the job is almost done. When it’s finally finished, you think you’ll feel a little bereft, but incredibly proud at the same time. This work – these works – are what you got into this business for in the first place. Well, not so much the works themselves, you suppose, but the inspiration that guided you towards tattooing was always going to culminate in what you’re doing here and now.
In the beginning, it was that motivation that mattered. Now the art – the quality of the finished product – is every bit as important to you. Your most important work should also be your finest.
You hope your subject will like it. You’re used to conversation while you work, but this client has said nothing throughout.
Even the moans and whimpers have subsided.
Not that you can blame them for that. You know that, working so close to bone, it hurts like hell. Meanwhile, silence is fine by you. You suspect you know the sort of conversation you’d be having.
Those peripheral thoughts drift away as you give the final detailed touches your full concentration. Even Stormzy seems muted. The air in your workspace seems heavy, as if even the building is holding its breath for the finished product.
When it is finished, the realisation almost takes you by surprise. It’s a little like snapping out of a trance. You withdraw the needle and allow the machine to buzz for a few seconds more before switching it off.
You meticulously clean out your needle, then spray a green soap solution over the tattoo before wiping it down to remove excess ink and blood. Finally, you apply an aftercare salve to the tattooed area to soften and moisturise the skin.
You step back and look at what you’ve done, and pride swells in your chest. You haven’t felt this way since your very first – incredibly basic and simple – tattoo. This one says exactly what you wanted it to say, and it says it beautifully.
You take up a mirror and hold it so the subject can see.
“Well,” you say, “what do you think?”
The response disgusts you. You don’t expect them to say anything. But the eyes say it all. Horror mingles with stark terror and fresh tears leak out, spilling onto your precious work. The salve will protect it, though.
Behind the silver duct tape sealing the lips, the client attempts to scream, hideous animal noises. Their body attempts to thrash against the straps binding them to the workbench. It’s ineffectual. The head can’t move, of course. The vice has held it tight and still, so you could work without any unhelpful movements.
You shake your head, sickened by the pathetic self-pity of this person. They’ll just have to have enough pity for both of you, because you feel none at all.
You hold the mirror closer, feeling a smile tug at the corners of your mouth.
“See?” you whisper. “The truth is written all over your face.”

Thanks, Dave, that sounds intriguing! Here’s the blurb:

A cruel death. A macabre calling card.
A killer on a mission.

A body is found outside a church in a small Hertfordshire town. Alastair Murdoch suffered before he died. But what really disturbs DI Nathan Quarrel is the Tarot card motif adorning the body: The Fool.

A different card, but from the same pack.

Unless Quarrel can decipher the meaning behind the cards and the connection between the victims, more will follow in a twisted agenda of abduction, pain and death.

‘Sivers is alongside the likes of McDermid and Billingham in terms of giving you characters you just long to know more about’ – Robert F Barker, author of the Jamie Carver series

You can purchase In Ink here. 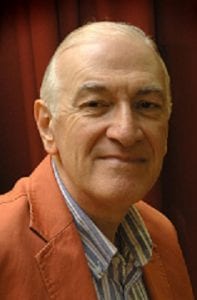 Dave Sivers grew up in West London and has been writing all his life. His books include the popular crime series featuring the Aylesbury Vale detectives, DI Lizzie Archer and DS Dan Baines.
The Scars Beneath the Soul and Dead in Deep Water were both top three bestsellers in the Amazon Kindle Serial Killers chart. His other works include the Lowmar Dashiel crime fantasy novels. In Ink introduces DI Nathan Quarrel.
Dave also writes plays and other material for the amateur stage and is a founder of the annual BeaconLit festival of books and writing. He lives in Buckinghamshire with his wife, Chris.

To keep up with Dave’s news and upcoming releases, subscribe to his newsletter at www.davesivers.co.uk.