Today I welcome David Evans to the blog to talk about the inspiration behind his recently published novel, Disposal. If, like me, you’re fascinated by the thoughts and planning behind the stories we read, I’m …

I’m delighted to welcome the lovely Linda Huber to the blog today to talk about her new release, Chosen Child. I was lucky enough to get an early read of this novel and found it …

No, it’s not Hugh. The name’s Will. Will Jackman. Although, at first glance, I can see how you might mistake him for the actor. He’s nearly as tall, athletic, dark haired and even handsome in … 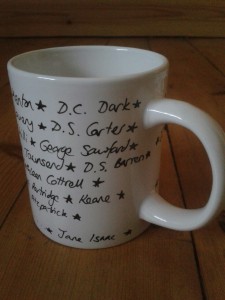 This week I’d like to share a photo of this delightful mug that one of my friends gave me as a present at my book launch. I should probably say that she is really my husband’s friend as although we had spoken several times via Facebook and email in the past, my book launch party was the first time we actually met face to face. And what a thoroughly lovely lady she is.

Her name (I don’t think she’ll mind) is Kate Anderson and she is an English Literature graduate and great reader, so my husband suggested her as a beta reader for The Truth Will Out when it was in its very raw state. She did a wonderful job and gave me valuable feedback on the plot and characters and I’m immensely grateful for her input.

But the mug was a great surprise! It contains all the key characters from both my first and second books. What makes it especially dear is that it was completed during the drafting stage of book two, and later, as often happens during editing, some characters were withdrawn and others changed names.

As my husband returns to work and our lives resume some kind of normality, my mind is turning back to my third book.

There is a strange, almost nostalgic pleasure in character traits entering my mind at passive moments, plotlines swirling around when I’m driving; settings jostling amongst my brain cells, crying out to be considered as I watch my daughter in swim class.

Read More →Back in the Game