I was thrilled to sign a contract with Oakhill Publishing for the audio version of After He’s Gone last year, but even more excited when they invited me along to meet the narrator and listen to a snippet of the recording.

The book is due to be published in audio on 15th May, and this weekend was scheduled for recording. Alas, I came down with a cold and spent Saturday in bed, but nothing was going to stop me attending. So, on Sunday, I dosed myself up and travelled across to their Oxford studio and, as expected, it was a real ‘pinch-me’ experience. 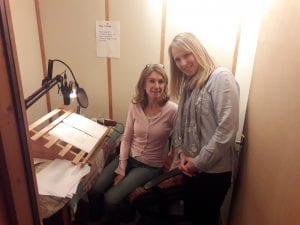 First up I met the narrator, Julia Barrie, and she couldn’t have been more friendly and welcoming. It’s rather surreal to meet the actor reading your book, especially as Julia’s acting credits span stage and screen and include George Gently, Our Friends in the North and Doctors (indeed she’s off next week to start rehearsals for another theatre production), and she was nominated for Audible Best Book of the Year, 2015 with Clare MacIntosh’s I Let You Go. You can imagine how pleased I was when she was selected to read After He’s Gone! 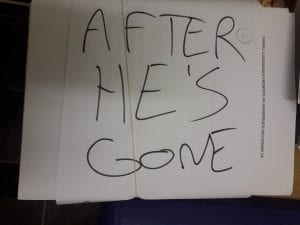 Julia was fascinating to talk to and she gave me a real insight into how audio production works. She works from a printed manuscript and reads through the novel before recording begins, marking up the script for different voices and accents and practising them in advance to make them more real. With the West Country, Northern Irish and Polish accents in After He’s Gone – I’d forgotten there were so many(!) – I was certainly testing her to the limit. Above is a copy of my script in the recording booth (which, incidentally, was sitting beside the script for John Connelly’s new book, A Book of Bones – I thought I’d died and gone to heaven). She read beautifully, and really brings the story to life through her voice.

I was introduced to ‘Wulfie’ (great name), the producer, and once recording commenced, Julia sat in a room alone, while Wulfie and I sat in an ante-room listening to her narration through headphones and he worked the equipment. He advised the unabridged book will take approximately two and a half days to record and it was truly fascinating to see how he worked.

I’d like to extend massive thanks to Oakhill and ISIS Publishing for inviting me to their studios yesterday, and to Wulfie and Julia for letting me intrude on their working day. It was great to meet everyone and see the production in action – definitely another ‘bucket list moment’ for an author like me!

2 thoughts on “A Visit to the Studio!”