I’m delighted to welcome Fergus McNeill to the blog today to talk about his new release, Ashes of America! I love Fergus’s writing and enjoyed his early crime novels, so am really looking forward to starting this one. Here he is to tell us a little more about it. 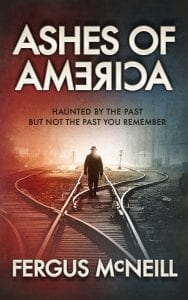 My favourite character would have to be Molly, a bravely optimistic English woman who we meet in wartime Switzerland. Although her life has been touched by tragedy, she refuses to be broken by it, and I always find myself admiring people like that.

Two names that spring to mind would be Erin Kelly and John Le Carre. I love it when authors write beautifully AND tell gripping stories – I wish I had half their talent.

I’m not sure I can claim to have a ‘process’. I do try to start out with an idea of where the story will go, but I often find that it changes direction and focus. Sometimes that can be a little scary, but there’s an enormous sense of relief when the pieces eventually slot together!

Good coffee is a vital ingredient for any book, but I strongly believe that coffee goes well with pastries and I’d be lost without a regular supply of cinnamon Danish swirls.

What if the past came back to haunt you… but it wasn’t the past you remembered?

It’s 1953, and an optimistic America is shaking off the hurt of World War II. Russia is defeated and Germany is now an ally. Former soldier Frank Rye is a small-town cop in rural Missouri, but the war has left him cynical and selfish. When his actions lead to the murder of a fellow officer, guilt drives him into a vengeful hunt for justice.
His search for the killer will drag him deep into his own past… to the wartime summer of 1944, when he was stationed in neutral Switzerland… to a clandestine world of love and lies. To unmask the killer, he must uncover the truth about the war… and about himself.

Thanks so much, Fergus, it sounds intriguing! You can purchase Ashes of America here. 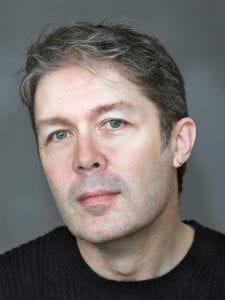 As well as writing crime novels, Fergus McNeill has been creating computer games since the early eighties, writing his first interactive fiction titles while still at school. Over the years he has designed, directed and illustrated all sorts of games, spoken at the Cannes Film Festival, and failed to excel at any sport whatsoever. He wishes he could cook.

Fergus lives in Hampshire with his wife and their enormous cat. He is the author of the Detective Harland series (EYE CONTACT, KNIFE EDGE and CUT OUT, plus the short novella BROKEN FALL) and the historical thriller ASHES OF AMERICA.